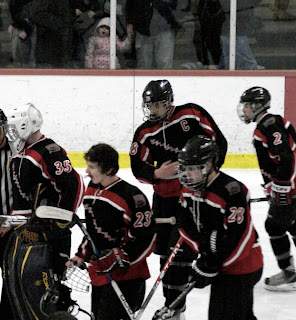 The Panthers needed to bring two points back onto the ferry from Martha's Vineyard in order to qualify for the postseason tournament. Unfortunately for Whitman-Hanson, tonight wasn't their night -- a 4-1 loss to the Vineyarders ended their season in its tracks and sent them golfing for the offseason.

In a packed house at Martha's Vineyard Arena, the Vineyard was honoring its senior players for senior night. Emotions were swirling and energy pulsed in the building. It was a perfect environment for a must-win affair, and the Panthers came out of the gates looking as though they were fully aware of that circumstance.

Just over three minutes into the game, captain AJ Glynn fired a shot from the point that was turned aside by Martha's Vineyard's goaltender, but freshman Charlie Murphy was on the doorstep for the Panthers to backhand the rebound home and give Whitman-Hanson a quick 1-0 lead. The fans were smiling and the players were pumped. It looked like a fabulous start and a sign of good things to come. Trust me, I wish I could say the same in hindsight.

Just 13 seconds after the Murphy tally (in Boston Bruins fashion, to say the least), the Vineyard answered down the other end with a goal that evened the score. The PA announcers hardly had a chance to read off Murphy's 4th goal of the season before the purple and white crowd on the other side was erupting at the equalizer. The early edge that Whitman-Hanson earned gradually faded away, and when the final five minutes of the period arrived,  MV preemptively put the final nails into the coffin. On a third-chance opportunity with a sprawling Tom Leonard attempting to keep the disc out of the cage, the Vineyarders batted home a rebound to take the lead with 4:40 to go in the period. Three minutes later, they executed a 2-on-1 that deflected off a Whitman-Hanson stick and into the net for a 3-1 MV lead after one. They never looked back.

We had mentioned the need for Leonard to be strong between the pipes for WH tonight -- he was. Leonard made several timely saves, including two breakaway stops and a point-blank 2-on-1 opportunity, when his team needed him the most. Plain and simply, the Panthers made too many mental mistakes and turned the puck over in the dangerous areas of the ice. It was somewhat of a frustrating affair to watch. Halfway through the second period, MV added their fourth and final goal right after the Panthers had failed to execute a power play opportunity that could have brought the deficit within one. It just wasn't happening tonight, and the black and red were sent home with that bitter taste in their mouths once again.

For the seniors, it is a disappointing ending -- coming up a mere 45 minutes short of a postseason birth, two seasons in a row. Last year, the dream was shattered with 23.4 seconds remaining. This year, it was decided a bit earlier. Still, those seniors left everything on the ice in their honorable careers. Phil Boussy. Coleman Lenane. Tom Leonard. Scott McArthur. Chris Mulrey. Adam Robinson. The Panther hockey community thanks each and every one of your for your contributions, and it wishes you all the best moving forward with your lives after high school hockey.

As for the returners, it will be a long and bitter offseason. It will be full of hard work and determination. For some of the sophomores, the only feeling they have felt on this team is the agony of falling just short. For the freshmen, they experienced this in their only season. For the juniors, they were in the program back when the Vineyard took down the Panthers in the first round of the 2009 tournament. Plenty of pain and adversity has passed under the bridge. But that's why the bridge is always being built -- one piece at a time, they will work their way back. What's under the bridge is gone. What is before them, for the guys returning, is a bridge to be walked upon. Unfinished business. It seems like it's in the distant future, but you'll be setting your alarm clock an an ungodly hour for the first day of tryouts before you know it.

Email ThisBlogThis!Share to TwitterShare to FacebookShare to Pinterest
Labels: Games