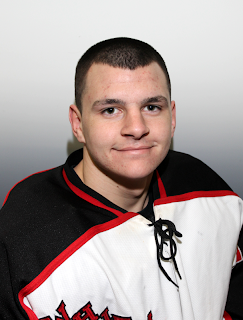 SMALL #1
Ryan is a Senior at WH who plays Goalie.  He has previously played for WHK Hawks, the SS Town Cup and the SS Coaches League.  Ryan also plays baseball for WH.  His most memorable hockey moment was "playing in the tournament last year in Providence."
Coach Bina: "Ryan is the ultimate Panther. He has been playing goalie for only a few years and has won some big games for us."